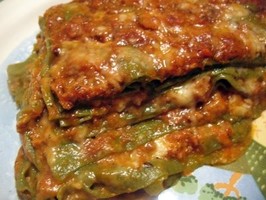 The pastry should be pale green and not too stretched thin.Also keep in mind that you may need to use a larger amount of flour as a function of greater moisture content of spinach.

The Academy of Italian Cooking has solemnly decreed the recipe for lasagna Bolognese. At the ceremony, held in the Chapel of the Palazzo Farnese Accursio, the deed containing the recipe, prepared by the notary Federico Tonelli, was delivered by Maurizio Campiverdi, President of the Italian Kitchen, the Delegation of Bologna San Luca, Gian Carlo Sangalli, President of the Chamber of Commerce of Bologna, in the hands of dr. Luigi Litardi, Secretary General of the Chamber of Commerce and the Mayor of Bologna, Bologna Giorgio Guazzaloca.

The recipe has been filed with the Merchandise 4 July 2003.
To protect, enhance and spread the "Lasagne" which, together with tagliatelle and tortellini to form the inseparable triad of great pasta Bolognese famous worldwide, the Academy of Italian Cooking, has carefully examined all the recipes published on the main Culinary texts exist in Italy, has carefully selected a number of traditional family recipes handed down from generation to generation in the city of Bologna and, after recourse to the experience and expertise of its academics and many experts, selected the recipe is considered the most traditional and authentic

Solemnly decreed by the Academy of Italian Cooking, the Delegation of San Luca Bologna May 28, 2003 and filed July 4, 2003 at the Chamber of Commerce of Bologna, Palazzo della Merchandise.

Place a saucepan three-fourths full of salted water to boil merrily.Cut the pastry into rectangle about 15 x lO cm or, for those who are skilled, slightly smaller than the chosen dish, throw them into boiling water and remove them as soon as it came to the surface.After a quick transition in cold water to dry on a clean towel, white cotton or linen. Grease the bottom of the pan of butter and sprinkle a few tablespoons of meat sauce and bechamel. Cover with the pastry rectangles needed and spread on a thin layer of bechamel sauce in abundance, very small knobs of butter and Parmesan, all in a layer as regular as possible, making sure that no air bubbles (to obtain this, drilling three or four times the dough with a toothpick).Continue this for at least 6 layers total and end with a cover sheet on which to hang a little 'meat sauce mixed with a little' of white sauce, some butter and a sprinkling of Parmesan cheese. FME to put a ribbon of butter in each corner of the pan. Then bake for 25-30 minutes at about 180 degrees in preheated oven. Who loves the lasagna a bit 'crunchy, we recommend turning on the grill (no more than 2 minutes) for a light gratin that does not create conflict with the soft interior. Finally, make sure that the layers are smooth, the sauce is plentiful but not excessive, the sauce is creamy and light distributed. Let stand 5 minutes before serving. The portions on the plate, must be strictly up! You can enrich the classic Bolognese sauce with immature eggs of hens, which is also a nice effect in the presentation of the dish, or prepare it with the addition of chicken giblets and livers, as was the custom, especially in the countryside.

The Italian Academy of Cuisine, Delegation of Bologna San Luca, has reconstructed the history of lasagna. The Greeks and the Romans called "lasagna" of the strips of dough cut into squares that were more or less regular cooked in a pot or on a plate and then variously seasoned or stuffed with vegetables and cheese. Nothing like today's lasagna Bolognese, but some of the great figures of antiquity greatly appreciated: Plato, Aristophanes, Cicero, Horace, Seneca and many others. The name derives from the greek "Lasana (tripod cooking) and the Latin" lasanum "(vase, container). Chrysippus of Tyana, University of Naukratis Gavio Apicius and Mark talk about it in their works. Famous is the quatrain Jacopone 0236-1306) which reads: Those who look most often to be misleading.Grain of pepper wins by virtue of the lasagna. At that time, the lasagne was, and still remained for many centuries, a type of pasta wider and thicker than normal, but united with all other both in cooking and in seasoning. Francesco Zambrini, in a cookbook of the fourteenth century, is the first and only to provide a recipe for lasagna that provides layers of pasta alternating with layers of cheese. It is undoubtedly the embryo of lasagna Bolognese. There are still eggs in the pasta and there is no meat, but it appears the basic concept of superposition of strata. The epic of puff pastry, variously stuffed, involving all the Italian Renaissance. Are well known names in the Horn of Maestro Martino of Lombard Platina, the Messisbugo Christopher Ferrara, Bologna Bartholomew's escape, but their works are not related to the current recipe lasagna bolognese, which could date back to the late seventeenth century for their wealth that reflects the glories of the Baroque era. Lasagna appeared only in the canteens at the most important holidays and long kept a proud and exclusive private home. Initially, there were more yellow than green, then green and strictly their recipes were kept jealously within families of the city and the countryside.

It is symptomatic that Pellegrino Artusi does not mention in his book "Science in the Kitchen and the Art of Eating Well", published in 1891, which is a veritable compendium of Italian regional cuisine. " The fame of lasagne spread first in Italy and then throughout the world thanks to some ancient Bolognese restaurant, at the beginning of last century, began to introduce them to a large customer who was immediately enthusiastic. In 1935 the celebrated Paul Monelli emphatically in his Wolverine-errant, "consecrating defmitivamente fame. As with all homemade food source there are many variations. Many families keep carefully their Bolognese recipe for lasagna and in good faith believe that it is the best. The Academy of Italian Cooking by codifying the classic recipe, traditional and authentic, intended to render a service to anyone in Italy and on five continents, will prepare you with loyalty to tradition and success with this sumptuous dishes from Bologna.